Explanation of the qualities of thermal treatment

The thermal treatment, known as hardening or tempering, is a fundamental aspect in the behavior of every piece of steel. The steel must be hardened to enhance their qualities, this treatment involves four basic steps: normalized after grinding; hardened when the piece is almost finished with a medium polishing, sub-zero treatment to precipitate the retained austenite and complete the hardening, and finally one or more tempering to ease tensions and lower the hardness to the desired values.
The qualities achieved will depend on the tests that have been made with each steel and the strictness with which they perform the process that has achieved the best result.

In our case we want is to hardened the blade so that its cutting edge is more durable.
A harder cutting edge will have a more lasting, but spend more time on his resharpening. With a lower hardness will recover the cutting edge quicker but also lose it very rapidly.
The hardness that the great masters have been established as the most balanced is 60 Rockwell “C”.
With this hardness we have very good durability cutting edge and not be very difficult resharpening. Until that blade hardness, we can sharpen with a good natural stone or a steel sharpener of thin grooves.

Test piece of ATS 34, hardened to 61 RC which has exceeded the bending moment and has been deformed without breaking. Below another test piece: SAE 5160, that has broken after having achieved a significant deformation.

There are also sharpening stones and ceramic sharpener, or better yet, diamond dust. With these elements (ceramic or diamond dust) can resharpening a knife easily hardened to over 60 RC.

It may appear that the solution for best performance is simply to harden all blades to 60 RC. It is not quite that simple. The higher the hardness the greater the brittleness and greater likelihood of breakage or cracking. For that reason most of the knives do not exceed 57 or 58 RC. Anyway we have seen many knives broken or cracked on its cutting edge.
The test pieces that I hardened with blades, show that my knives do not break without previous deformation. I full guarantee it. 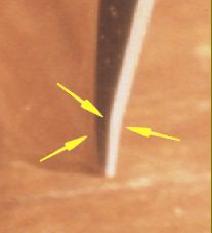 With these and other tests demonstrated again that it is possible to hardened the blade to 60 RC, without risk of breakage.
A good hardened blade must flex (within the limits permitted by its thickness) without risk of breakage and pass the elastic limit to arrive the deformation without breaking (as in the sample picture on the left).
This knife (Mod. 38) is twisted without breaking, by prying nailed on something hard, maybe a bone or a joint, although it is “fully hardened”, ie “side by side” to 61 RC of hardness. 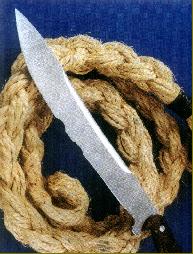 The right photo shows a jagged knife. Says the article published in the journal Blade of August 2000, signed by Ed Fowler, that Schempp, after successfully cutting the ropes, and win the competition in the Oregon Knife Show in 1999, dented knife trying to cut branches a task for which the knife was not prepared. I agree that a knife prepared to cut rope is not suitable for axing branches, not to have the structure and proper angles, but would not rule out that the thermal treatment also has any effect on the result.

In my conference at the Expo Arms 2001, discoursing on the importance of angles and hardness, with this knife cut 30 or 40 times hemp ropes 1 inch and the same number of pieces of sole, few empty cans of soda and without re-sharpening the cutting edge, the blade intact was “shaving”. Its blade is extremely thin concave, of SAE 52100 steel, hardened and tempered with a hardness of 61-62 RC. The knife belongs to the private collection of Colonel. J. B. Dagger.